A rare edition of Margery Williams’ 1922 children’s book The Velvet Rabbit causes the short break between Chandler and Joey in the fourth season of Friends. When Chandler finds an early copy for Joey’s girlfriend’s birthday, he inadvertently reveals his love for her. “What a great way to say ‘I secretly love you, roommate’s girlfriend,'” Phoebe says.

As misguided as Chandler’s scheme is, it confirms that few gifts are better than a rare children’s book. They combine emotional attraction with increasing collectible value. “There’s something about the nostalgia for a classic children’s novel,” says Danielle Croft, a math teacher from Ontario, Canada, who started her collection six years ago after her mother told her. given a vintage edition of Kidnapped by Robert Louis Stevenson. “I have copies of Alice in Wonderland, The secret garden, Anne of Green Gables and Little woman, to name a few. Vintage and antique editions are often adorned with beautiful, intricately designed covers covered in gilding.

Over the past 20 years, interest in the children’s book category has exploded. “There was a period between around 1930 and 1960 which was particularly fertile for children’s literature”, explains Christiaan Jonkers, who founded Jonkers Rare Books in Henley-on-Thames almost 30 years ago. He names CS Lewis, JRR Tolkien and Arthur Ransome – who was “terribly popular then” but less read now – as part of this era of creativity. “People who read these books as children have grown up now. And they seek to relive their childhood, in a sense. the Harry Potter books that became collectables in the 2000s simply made the already growing market more mainstream, he says.

Bernard Shapero, founder and CEO of London’s Shapero Rare Books, also noted the surge in prices over the past decade. He puts a “very good” first edition of Tolkien The Hobbit at £75,000 – £80,000; a good first edition of Harry Potter and the Philosopher’s Stone is the same (“very valuable but they are not so rare”, notes Jonkers). The story of Julia Donaldson in 1999 The Gruffalo has “made a wonderful entrance” onto the scene – it currently has a good first edition priced at £575.

A book in good condition with a dust jacket is always a safe investment, but it’s when books have inscriptions or dedications – especially to someone who marked them – that they gain “an added dimension”, says Jonkers . He had a first edition of the first Harry Potter which was “listed on publication – so even before JK Rowling was famous – to the cousins ​​of certain people she was staying with in Edinburgh while she was writing it”.

Shapero highlights a recent copy of Winnie the Pooh inscribed by author, “For Soldier from Christopher Robin and AA Milne, 14.xi.26.” Beneath the inscription was the signature of the “soldier”: Louis Goodrich, an actor whom AA Milne met at the Garrick Club. “Milne asked Goodrich to dress in full military uniform to surprise his son, Christopher, who at the time was fascinated with soldiers.” Meanwhile, Raptis Rare Books of Palm Beach, Florida recently sold a first edition of Walt Disney’s Fantasy with a dreamy illustrated aquamarine cover, signed and autographed by 13 people (including Walt Disney) working at Walt Disney Studios in the 1940s for $14,000. All entries are to a secretary who had requested an autographed copy of Fancy when she left to get married.

And whether to read or display? “My most treasured and collectible books are protected by clear archival polyester covers and some are stored in glass display boxes,” says Croft, who has garnered a small Instagram following for his bespoke bookshelves. beautifully arranged for her JM Barrie collection. “I have reading copies on it but I don’t read my collector’s books to preserve their condition.” 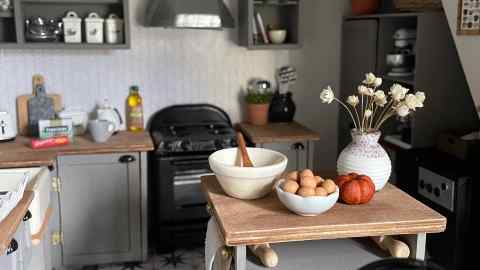 One of Jonkers’ clients, Paul, who works in finance, started collecting for his daughters about 10 years ago. Over time, he and his wife sought out fine editions of the books suitable for reading at every stage of their development. Not only has this cultivated their appreciation for physical books, but they’re able to “have conversations about how content and style have changed over the past 100 years,” Paul says. “We keep them at home, in a library in our office. I often sit down with my girls, choose a book, slowly open it, discuss it with them, then put it back on the shelf.