STA, May 20, 2022 – Comics artist Izar Lunaček was awarded the Order of Arts and Letters on Thursday. He received this distinction for his contribution to the promotion of comics, to the popularization of French culture in Slovenia and to the strengthening of ties between France and Slovenia in this field.

The French Institute in Slovenia says Lunaček, who received the rank of knight of the order, has become one of the most important defenders of Franco-Slovenian relations in the field of comics over the past 15 years. .

Last night at the Résidence de France, decoration of the cartoonist #IzarLunaček to the rank of Knight of Arts and Letters 🏅 for his colossal work in favor of Franco-Slovenian cooperation 🇫🇷🇸🇮 in the field of the 9th art ✍🏻 Congratulations!
@SLOinFRA @IFParis @CiteBd #Stripolis https://t.co/sf06A0YJKY 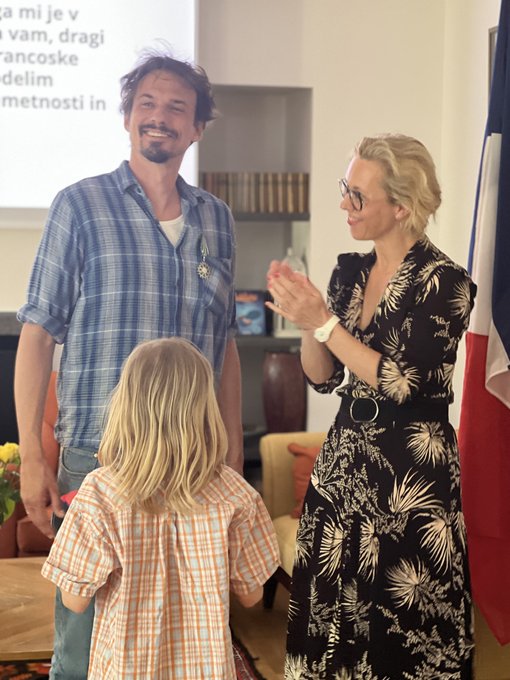 In addition to his prolific artistic activity, the 43-year-old man spent a decade at the head of the Stripolis association, a major factor in the promotion of comics to the general public.

The Tinta Festival, formerly Stripolisfest, which he co-founded, is today an unmissable event for professionals and connoisseurs as well as for enthusiasts.

Lunaček, who was also one of the precursors of the Drawn Concert concept in Slovenia, is a great connoisseur of the Angoulême International Comics Festival in France, where he has forged valuable links with French authors and publishers.

In 2020, Stripolis becomes a publishing house that has already published several Slovenian translations of French comics.

Lunaček, who is also a painter, comparatist and philosopher, received the honor from the hands of the French ambassador to Slovenia Florence Ferrari.