In film and television, historical dramas have never gone out of fashion. Fans of period dramas, both in Korea and abroad, enjoy being transported to another era and experiencing the stories that swept away – or were set in motion by – our ancestors. Some watch to see how the present compares to the past. Others watch to see progress. Foreign Korean-philes can take a crash course in Korean history while watching historical films. But all historical dramas create characters, add romantic plotlines, and confuse or invent events to make sure viewers don’t lose interest. With Fiction vs. History, Korea JoongAng Daily attempts to separate fact from fiction in popular period dramas and films to clarify and dispel misunderstandings. 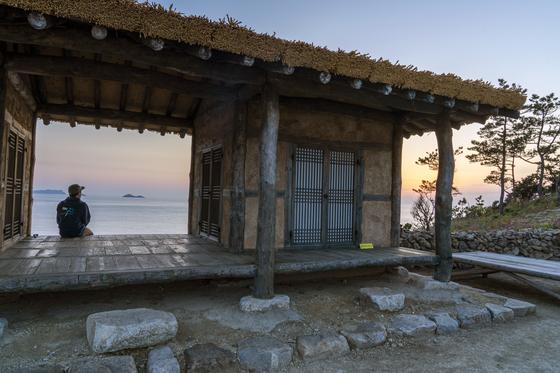 Ms. Gageo’s house set is not located in Heuksando but in Shinan County of Bigeum Island near Heuksando in South Jeolla. [JOONGANG ILBO]

“The Book of Fish,” a historical black-and-white film by Lee Joon-ik (2021), released on Netflix last May, reappeared in the top 10 on the streaming platform early last month.

Netflix Korea said the re-emergence of its top 10 list may be due to more people choosing to stay home during summer vacation due to recent downpours.

The landmark film appears to be one of the popular films on the platform since winning the grand prize at the 57th Baeksang Arts Awards last year, Netflix Korea explained. The film was also a hit with foreigners with English subtitles provided in several Megabox theaters last April. The film is currently included in the movie list on many Asiana and Korean Air flights. 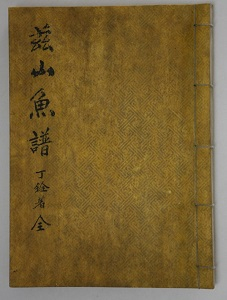 Most Koreans know Dasan Jeong Yak-yong (1762-1836) of the Joseon Dynasty (1392-1910), who wrote some 500 works including masterpieces like “Heumheumsinseo” (1819) centered on legal theory , “Aeongakbi” (1819) which focuses on linguistics, “Sadekoryesanbo” (1820) on diplomacy and the famous “Mongminsimseo” (1818), during and after living in exile in Gangjin County, southern Jeolla from 1801 to 1818 for his involvement in Catholicism. “Mongminsimseo” depicts the harsh living conditions of the working poor and the duties local administrators were required to perform for them for moral and legal reasons. His poems and works are featured in school textbooks for students to memorize.

The film sparked interest because the story did not revolve around Dasan Jeong Yak-yong, the already universally recognized figure, but his less popular brother Jeong Yak-jeon (1758-1816). Veteran actor Seol Kyung-gu plays Yak-jeon in the film. 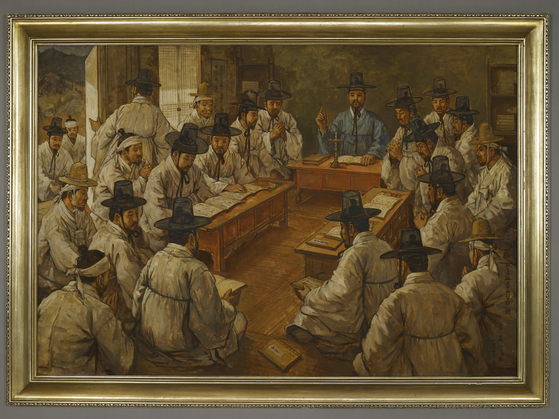 A painting depicting a scene of Joseon scholars who led the Koea Catholic movement in the 1780s includes the Jeong brothers – Yak-jeon, Yak-yong and Yak-jong. It is painted by Kim Tae in 1984. [SEOUL MUSEUM OF HISTORY]

Yak-jeon was one of the scholars of Joseon who was exiled during the Catholic Persecution of 1801, also known as the Sinyu Persecution during the reign of young King Sunjo, although it was Queen Jeongsun (1745-1805) , the second queen consort of King Jeongjo (1694 -1776), who was really pulling the strings after the death of her husband.

It was during Yak-jeon’s exile that he wrote a book on marine biology, which is called “Jasaneobo”, or “The Fish Book”. In the book, Yak-jeon states that he wrote it to help peasants decipher the 226 varieties of fish and sea life living in the waters surrounding Jeju Island.

Director Lee said in an interview with Korea JoongAng Daily that he wanted to highlight older brother Yak-jeon’s life in his film after learning that King Jeongjo had praised him highly. It is reported that King Jeongjo said that Yak-jeon was better because he was the opposite of Yak-yong who was enamored with the neo-Confucianism of this generation.

“’Jasaneobo’ is about the natural sciences. It was something the aristocrats of Joseon lacked [knowledge about]and the result is one that transcends social hierarchy and rank,” the director said in the interview.

Although another main character in the film named Chang-dae, played by Byun Yo-han, appears to be imaginary, created to help better tell the biographical structure of Yak-jeon’s story, it is actually a an actual character who appears in the preface to Yak-jeon’s “Jasaneobo.” 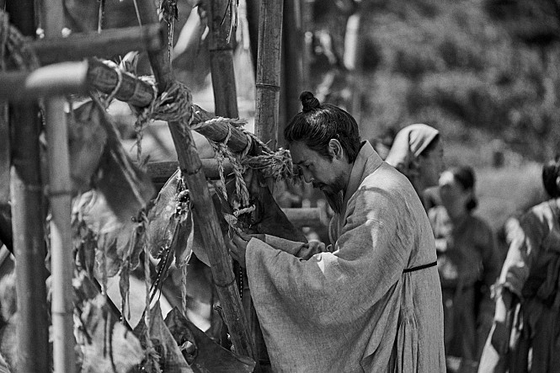 Yak-jeon mentions his name and describes him as a “silent and shrewd person to carefully observe everything. [he] sees and hears”. Yak-jeon also quoted Chang-dae while recording sea animals for the book. But nothing else is mentioned about him, hence, other details in the movie like how he saved Yak-jeon’s life or caught him in season’s treats when he was sick, are all fictional. There are no historical documents proving that Chang-dae became Yak-jeon’s student.

There is also a dramatic story in the film of a man named Moon Sun-deuk. Moon, in the film, is portrayed as a fisherman who surprises the islanders of Heuksando after returning to the island for the first time in three years. Everyone thought he was dead, but he made it home safe and sound. Moon tells the islanders he encountered a storm and drifted to Okinawa in Japan and then back to the Philippines “it’s not even on a map”. He says it took him three years to finally return home. It sounds very dramatic, but it is a historical fact. Yak-jeon, as portrayed in the film, was so fascinated by Moon’s story that he decided to write a book called “Pyohaesimal” (Journal of Drifting Out to Sea), from 1805 to 1816. The book provides detailed accounts of the culture of The Philippines. The diary is considered an important text as the earliest record of Koreans visiting the Philippines.

But there is also a fictional side. 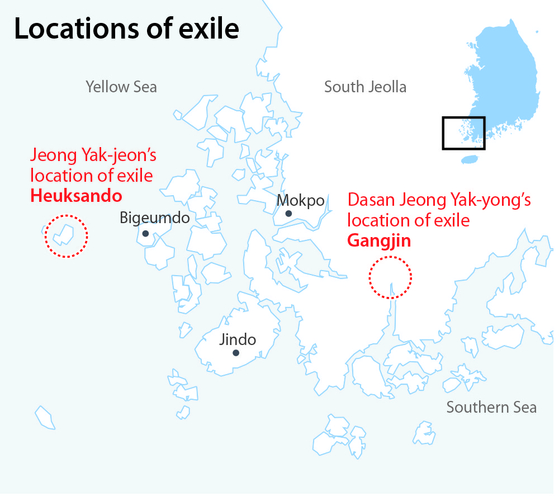 In the film, however, it is described that this fisherman is from Heuksando and that Yak-jeon met this man while in exile on the island. But according to historical records, Yak-jeon had stayed on Ui Island for several years before reaching Heuksando and it was there that he met Moon. After he finished writing Pyohaesimal, he went to Heuksando, where he met Chang-dae.

Occasionally, the film also shows Yak-yong, played by Ryu Seung-ryong, exiled in Gangjin. There is still a pavilion called Dasan Chodang, where Yak-yong wrote many masterpieces in the area. Dasan is Yak-yong’s pseudonym.

Yak-jeon died in 1816, while in exile. According to historical records, his brother Yak-yong, the only living member of the immediate family, was unable to arrange his brother’s funeral as he was still in exile. Records indicate that it was Moon, the fisherman of Yak-jeon’s “Pyohaesimal”, who arranged for Yak-jeon’s funeral. Therefore, the depiction of Yak-yong ending his exile and going back to Hanyang, or present-day Seoul, is fictional. In reality, Yak-yong ended his exile in 1818, two years after his brother’s death. 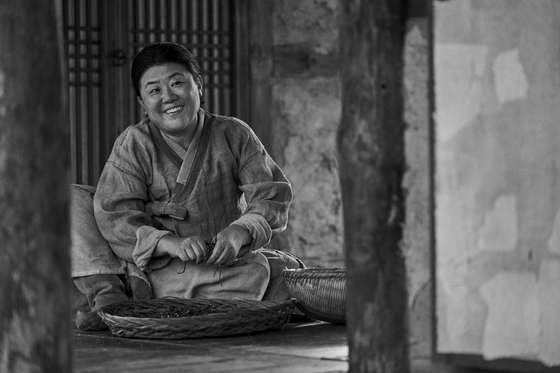 Ms. Gageo is a real-life figure who is mentioned in Jeong Yak-jeon’s “Jasaneobo,” but most of the details about her are fictional. The character is played by actor Lee Jung-eun. [MEGABOX PLUS M]

What about Mrs. Gageo, who becomes Yak-jeon’s wife after providing Yak-jeon with her home during her exile in Heuksando? Ms. Gageo, played by veteran actor Lee Jung-eun, is a real character who is mentioned in Yak-jeon’s “Jasaneobo” for helping him write the book. But everything else, like living together, getting married and having children, was made up.