Caught between art and literature, comics and graphic novels have successfully emerged as an alternative art form, one that expresses perspectives while reflecting on the cultural context involved.

Visual storytelling as we know it today stems from a rich history of vivid stories and colorful illustrations that are the result of conscious efforts to induce a comic book culture in India. The main reason being to keep the culture and traditions alive by idolizing mythological characters and inducing a moral that has so profoundly influenced the nature of comics and graphic novels in India.

It’s no surprise that a country that has immortalized scrolls and illustrated manuscripts is opening up to the idea of ​​comics and graphic novels. The first example of what closely resembled a comic strip in India was in 1947. In 1947, famous Telugu film producers B Nagi Reddy and Aluri Chakrapani founded and published a children’s magazine with the aim of helping Indian children to learn more about the cultural richness of the country. Named Chandamama, the magazine published stories creatively adapted from mythological stories and epics such as the Ramayana and Mahabharata. Chandamama was originally released in regional languages ​​like Telugu and Tamil and around 2004 it was adopted in other local languages.

It was also around this time that globally popular comics like Tintin, Asterix and Obelix, Archie Comics and Commando started making their way to India. Although the comics were aimed at a niche audience given the high prices of them, these comics have always been part of growing up in an Indian household.

Tintin and Archie Comics still have loyal Indian readers today. Tintin, which had references to India in series like Tintin in Tibet and Cigars of the Pharaoh, was also translated into regional languages, increasing its popularity. According to BBC reports, the Bengali children’s magazine Anandamela “brought Tintin to India in a local language for the first time in the mid-1970s”.

Jatin Varma, Founder of Comic Con India, says, “One of the first comics I ever read was Archie Comics, and millions of comic book fans in India have a similar story to share. They are considered Indian like some of our local comics.

However, it was with the Amar Chitra Katha comic book series that India officially ventured into the comics space in 1967. Although graphic novels do not have a well-defined timeline in India unlike to comics, it is believed that India’s first attempt at graphic novels was when Orijit Sen wrote his River of stories in 1994. Published by Kalpavriksh, Sen’s pioneering work focused on the impact of the Sardar Sarovar Dam on the Narmada River in Gujarat on the locals.

Talking about the specificities of Indian comics and graphic novels, Pratheek Thomas, co-founder of publishing house Studio Kokaachi, says: Currently seeing a huge boost; for example, publishing houses like Zubaan and Yoda press publish a number of non-fiction works. A lot of people also do realistic fiction and personal comics to some degree. Kokaachi is a storytelling house that focuses on original graphic stories told through comics, sequence art, picture books, and animation.

“Comics and graphic novels are a niche!” – according to Anindya Roy, founding director of the Delhi Comic Arts Festival (DeCAF).

Suyatra Mukhopadhyay, an avid reader of comics and graphic novels, and student of mass communication at the AJK Mass Communication Research Center, Jamia Millia Islamia in the capital New Delhi, says: “I read comics Indians, although I was mostly drawn towards Western counterparts. However, one of the best graphic novels I have read lately was written by this Bengali novelist named Sarnath Banerjee, who goes by The Barn Owl’s Wondrous Capers; and of course I grew up on Nonte Phonte, Handa Bhonda, Batul le Grand, also a bit of Tinkle. What I think sets Indian comics apart from Western comics is a lot of the cultural background. Also, comics like Amar Chitra Katha focus on Indian mythology, and that’s what most comics are based on. However, I think that the comic nerd culture in India is mostly derived from Western culture and is an extension of it. I think the main reason is the fact that the notion of strictly kids’ comics is still quite prevalent here. As a result, Sarnath Banerjee’s graphic novels get a niche target. I think we have good content for comics in India, but until we take comics seriously as a medium that can be just as influential as movies or a book, things won’t change.

Siddhartha De Bose, a film and television production student at the Xavier Institute of Communication, adds: “Indian comics have a pulp fiction history, like all comics. Except Western comic culture has taken a sci-fi route and India has stuck to stories of socio-political and sexual exploitation. When asked why Indian comics and graphic novels haven’t been chosen by readers, Bose replies, “Personally, I think it’s largely because of the hegemony of American comics in the whole world ; and yes, mature themes don’t really help the cause. That’s why the only native stuff you see coming out are Chacha Chaudhary and Tinkle.

Expanding on the fact that comics are still a niche in India, Thomas adds, “A lot of the comics that we make are for a class of people who are very educated, who have access to and understand the medium, and have the ability to do so. money to buy it. , because comics are expensive. Sharad Sharma does a great job that touches many people who haven’t read comics before. It gives them a platform to tell their stories and also ownership over their own stories. At least within a certain community they get their own voice. However, there is a huge scope for market penetration between the educated young and upper middle class illustrator who are our primary readers and the NGO-based comics and comics like the ones Sharma produces. There are still only Tinkle and Amar Chitra Katha. There is also a huge lack of material for children’s comics. So far, comics are a niche.

Roy says, “I have a publishing house, and over time I found I wasn’t able to sell a lot of comics. There was no culture as enthusiastic about consuming comics as we were when it came to producing them. I have found that it is rather difficult to sell more than 1200 copies of comics or graphic novels at a time. Our goal is to increase this number and push more indie comics and graphic novels to increased circulation.

Thomas argues that another issue holding back the growth of comics and graphic novels in India is the lack of focus and acceptance by mainstream publishing houses. 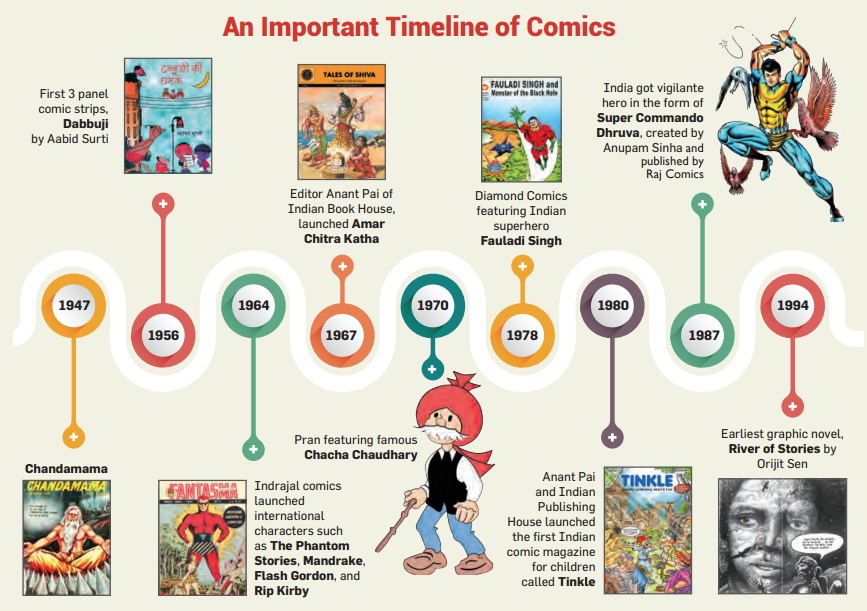 In the mid-1990s, Sharad Sharma launched the World Comics Network which held over 1,000 comic book workshops in the most remote and troubled parts of the globe and trained over 50,000 ordinary people. Through Grassroots Comics, Sharma gives voice to marginalized groups and people living in remote and conflict-affected areas by using comics for advocacy and information dissemination. Sharma also uses comics to promote literacy while promoting comic book journalism, a fairly recent phenomenon. Sharma uses comics as a tool to talk about development issues, especially among South Asian countries.

In another move to give a platform to the comic and graphic novel space in India, Roy organized the first edition of the Delhi Comic Arts Festival (DeCAF). Hosted by the India International Center (IIC) in New Delhi, DeCAF has honored the independent international comic, cartoon and illustration scene in various ways by showcasing and exploring this art in a different way. its forms.

Speaking about using the two mediums as an alternative voice, Roy added, “People who didn’t have money to make films, asked me how they could raise awareness and educate people in small towns, villages and villages, which will also be effective as a cinema medium. For these people, I suggested comics because it is easier to communicate through the vivid illustrations and sometimes simple supporting texts to accompany the illustrations. I personally facilitated workshops we went to and trained journalists and activists in the art of comic illustration to get a social/political message across. The idea was to highlight how a visual medium like comics can be used effectively to communicate the desired message. A heavy article might not be the right choice as the message can get lost in translation, but comics have a different visual appeal that holds attention longer in such cases.

Like most art forms, the very fact that there is a divide between commercial and indie comics and graphic novels in India speaks volumes about the journey the medium has been on. Crossing territories in pop culture, the comics started a whole different conversation.

While Comic Con India, which is a native version of its popular global counterpart, focuses on celebrating the pop culture surrounding comic books with an emphasis on cosplay and merchandising, Indie releases, much like DeCAF, relate to the art form and its practitioners. .

Read also – An overview of the comic culture business in India.

Archie Comics popular to get a Bollywood makeover

Bad sense of humor behind India’s failure to produce sitcoms.