Readers’ Favorite is one of the largest book review and award competition sites on the Internet. They have earned the respect of renowned publishers such as Random House, Simon & Schuster and Harper Collins, and have received the Association of Independent Authors ‘Best Websites for Authors’ and ‘Honoring Excellence’ awards. They are also fully accredited by the BBB (A + rating), which is a rarity among book review and award competition companies. 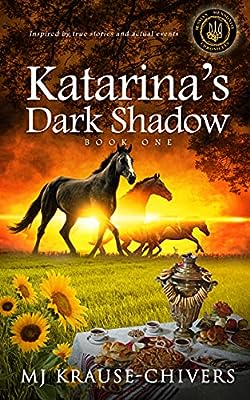 “Katarina Rempel’s dream was to be a schoolteacher when she was old enough and to travel the world. Much like other groups in Europe and possibly the rest of the world, Mennonite women were supposed to be concerned only with housework and their husbands. Katarina and her family lived in Russia at the beginning of the 20th century. Perhaps Katarina was too ambitious about her future, especially for an ordinary Mennonite teenager, now that there was speculation about an imminent outbreak of war in Russia and Germany. With dangerous Russian gangs on the loose, political pressure in the country and a very volatile mass of Russian compatriots, is war likely to happen? If so, will the Mennonites survive? Having found his mother’s diary in the mid-twentieth century (the “post-war Germany” era), Peter, Katarina’s son, tells his mother’s story from the accounts in her diary, in the Russian Mennonite Chronicles of MJ Krause-Chivers (Katarina’s Dark Shadow).

“Russian Mennonite Chronicles is an incredible novel on the theme of dystopia. The author forges a demanding and engaging storyline that exposes the agony and suffering that Mennonites endured during the Russian Civil War. The story unfolds perfectly at the beginning of the 20th century. This is seen in the choice of words and ideas that embrace the use of technology and vocabulary of the time. The vivid depictions also impressively bring out the setting of the story. What I love most is how the author beautifully integrates Mennonite culture and beliefs into the storytelling, emphasizing their uniqueness compared to Russians and other Europeans. Needless to say, I learned a lot from the Russian Mennonite Chronicles (Katarina’s Dark Shadow). The author boldly reveals the character traits of the characters. There is a generally somber tone accompanying the narration, subject to the agony expressed in MJ Krause-Chivers’ words. This, added to the suspense and tension of the book, took me on an emotional roller coaster. I’m about to get the next installment of MJ Krause-Chivers’ Russian Mennonite Chronicles. I loved this book. “

You can read more about MJ Krause-Chivers and “Katarina’s Dark Shadow” at https://readersfavorite.com/book-review/russian-mennonite-chronicles where you can read the author’s reviews and biography, as well as connect with the author directly or through their website and social media pages.