German professor Berthold Damshäuser has translated some of Friedrich Nietzsche’s most “nourishing” aphorisms into Indonesian and compiled them into a book.

“Be yourself” is perhaps one of the most repeated mantras of the 21st century. With this phrase, we seem to be encouraging each other to stay true to ourselves and our capacity for life without comparing ourselves to others.

No influencers or any of today’s successful entrepreneurs came up with the motto. The expression originally sei du selbst (Be yourself), was written by the German philosopher Friedrich Wilhelm Nietzsche (1844-1900) in his book Schopenhauer as Erzieher (Schopenhauer as an educator, 1874).

“It is derived from a long text by [Greek poet] Pindar [also known as Pindar, 518-438 BC]said German professor Berthold Damshäuser in fluent Indonesian in an interview with Jakarta Post at the Goethe Institute in Jakarta on August 27.

“Nietzsche seemed to have loved and repeated [the phrase] again and again to describe [his concept of] übermensch [super-human].”

The professor, who teaches Indonesian language and literature at the University of Bonn, has compiled over 200 Nietzsche aphorisms, translated into Indonesian and published in a book titled Jadilah Diri Sendiri! Kumpulan Aforism dan Kata Mutiara Friedrich Nietzsche (Be yourself! A compilation of Friedrich Nietzsche’s aphorisms and words of wisdom).

The 172-page book was launched at the Goethe Institute in Jakarta on August 27.

“I believe the contents of the book will nourish the soul and intellect of orang awam [laymen]Damshauser said.

“I have very different views from those of Nietzsche,” the professor said. “But I don’t mind. Nietzsche wrote so many enriching and stimulating aphorisms. It was a pleasure for me to be able to translate these beautiful texts from German into Indonesian.

Aged 65, he is an expert in German-Indonesian and Indonesian-German translation and interpretation.

The professor fell in love with Indonesia while studying German literature and philosophy at the University of Bochum.

“It all happened by chance,” he said. “An Indonesian friend invited me to Indonesia. Then I fell in love with the country and learned the language.

Damshäuser was so enamored with the country that he pursued bachelor’s, master’s and doctorate degrees in Indonesian language and literature at the University of Cologne, University of Bonn and University of Indonesia between 1978 and 1984.

“I’m Indonesian,” he says with a proud smile.

He has been teaching Indonesian language and literature at the Institut für Orient und Asienwissenschaften (Institute of Oriental and Asian Studies) at the University of Bonn since 1986.

Damshäuser was commissioned to interpret for former German Chancellor Dr. Helmut Kohl during his visit to Indonesia in 1993.

In 1995, the professor was also commissioned to interpret for former Indonesian President Soeharto during his visit to Germany.

During his career, Damshäuser has translated and published more than a dozen books of literature from German into Indonesian and vice versa. Among his most important works is Sprachfeuer (Fire Tongue, 2015), an anthology of modern Indonesian poetry which he translated into German.

In 2015 he also wrote a book titled Ini Dan Itu Indonesia (This and That Indonesia), which contains his views on the country.

The professor always admired Friedrich Nietzsche for his life and works.

“Nietzsche was no coward at all,” he said. “He was sick most of his life and yet never complained. He accepted all the challenges in his life and faced them with courage.

In the last chapter of his book Jadilah Diri Sendiri: Kumpulan Aforism and Kata Mutiara Friedrich Nietzsche, the professor also listed a brief biography of Nietzsche, including the years he suffered from debilitating migraines and depression. While stoically suffering, the philosopher wrote another of his famous quotes, was mich nicht umbringt, macht mich stärker (what doesn’t kill me makes me stronger).

“It is indeed a good teaching from Nietzsche, especially at this time when many people feel victimized in society,” the professor said. 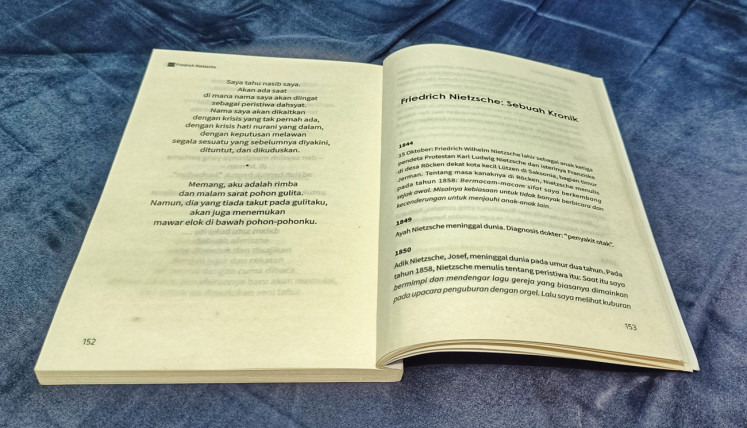 It took Damshäuser almost three years to compile Nietzsche’s aphorisms and translate them into Indonesian.

“I read more than ten Nietzsche books and selected some of his most interesting quotes before translating them into Indonesian,” the father-of-two said.

According to the professor, the main difficulty in translating the quotes is the ambiguity of the Indonesian language.

“The Indonesian language is very ambiguous,” he said. “A word or a sentence can mean many things. It is very difficult to choose the right one [word/phrase] when translating from German to Indonesian and passing on common sense.

The lack of time in Indonesian also makes translation into the language more difficult.

The book is published by Diva Press, a Yogyakarta-based publisher.

“The compilation sheds new and interesting light on Nietzsche, especially since his aphorisms were translated by a native German, who is fluent in Indonesian,” Diva Press representative Nisrina said in an interview on WhatsApp on September 16.

Previously, the publisher also published two other books on Nietzsche, which is Syahwat Keabadian (Eternal Passion, 2020), a compilation of poems by the German philosopher, compiled and translated by Damshäuser and the Indonesian poet Agus R. Sarjono, and Zarathustra (2019), which was translated by Indonesian literary critic HB Jassin.

The first edition of Jadilah Diri Sendiri: Kumpulan Aforism and Kata Mutiara Friedrich Nietzsche is printed in 1,500 copies and is available in major bookstores and market places for 58,000 Rp.

“I thank Pack [Mr.] Berthold for his work which has enriched the wealth of translated literature in Indonesia,” Ayu said during a discussion following the book launch at the Goethe Institute Jakarta on August 27.

“[Nietzsche’s] the sentences are indeed beautiful,” Ayu said. “Perhaps it is because Nietzsche was not only a philosopher, but also a poet and a composer of music. [It’s] a fact that many of us often forget.

According to Ayu, readers can easily take any of Nietzsche’s beautiful aphorisms and upload them to social media to impress their followers.

“If you ever run out of ideas to post on Twitter or Instagram, you can just refer to the book and pick out some of the smart phrases from there,” Ayu added with a meaningful smile.

Dr. A. Setyo Wibowo, a lecturer at Driyarkara School of Philosophy (STF Driyarkara), also endorsed the book during the discussion.

“by Nietzsche [thinking] was never easy to understand,” Setyo said. “Thus, I really appreciate the translation of Nietzsche’s aphorisms by Berthold Damshäuser, a German fluent in Indonesian.”

For the next edition, the speaker suggested that Damshäuser also include an interpretation of each of Nietzsche’s aphorisms in the book so that the sentences are not “enigmatic sentences” that are difficult for laymen to digest.

But Damshäuser seems to disagree with him.

“Let’s forget who Nietzsche was, what he was trying to say, and just read the book,” Damshäuser said. “Read it carefully. Read it several times and immerse yourself in its sentences. Do you agree with them? Or do you disagree?”

“[Reading the book] can be the first step in getting to know yourself and being yourself.